PhotographyBlog reviews the Canon ELPH 100 HS (IXUS 115 HS) and writes;
“Whilst it’s not in any way a game change or particularly innovative, if you’re looking for a simple to use point and shoot camera that takes better than expected pictures, you can’t really go wrong with the Canon IXUS 115 HS.”
Rating:

CNET reviews the Canon ELPH 100 HS (IXUS 115 HS) and writes;
“The camera also has a high-speed burst mode that can shoot 3-megapixel photos at up to 8.2fps. The results are very good compared with similar modes on other cameras I’ve tested, suitable for small prints and definitely for Web use.”
Rating:

Cameralabs reviews the Canon ELPH 100 HS (IXUS 115 HS) and writes;
“For an entry level model, the ELPH 100 HS / IXUS 115 HS has a huge amount to offer. Not to be underestimated is that it’s an ELPH / IXUS, so it’s well built, looks stunning and is super-compact. Its 4x zoom range is nothing more than adequate, but if you don’t go in for panoramic landscapes or wildlife photography, that will be no loss and 4x is good enough to help frame the vast majority of ‘everyday’ shots.”
Rating:

Digitalcamerainfo reviews the Canon ELPH 100 HS (IXUS 115 HS) and writes;
“The 100 HS takes arguably the best photos of any sub-$200 camera on the market. It can capture decent shots even in challenging settings, and in ideal conditions—outdoors on a bright, sunny day—its images are bright and clear with true-to-life colors.”
Rating:

PCMAG reviews the Canon ELPH 100 HS (IXUS 115 HS) and writes;
“The 100 HS kept noise under the 1.5 percent threshold all the way up to ISO 1600, which means it will take clear photos, without a flash, even in poor lighting conditions.”
Rating:

Very Nice Camera
“Very good photo quality! When using this camera, I suggest you keep in auto mode. Its a really good auto mode unlike other auto modes on other digital cameras. You will always get a sharp shot with less grain. The HS system really helps. Very good 1080p for a small camera.” – By Logic227
Rating:

Everything I wanted and more
“This camera is exactly what I was looking for. I had previously had an older model (by a year or two) and was pleased with it, and hoped that nothing significant was changed that would decrease the quality. Well I was really pleased when this came in the mail. The new features of Super Slow Motion, and Recording in full 1080p are absolutely incredible.” – By supersonicsixteen
Rating:

Canon ELPH 100 HS – good everyday camera
“The ELPH has several combinations of photo quality/resolution, and allows you to select between four movie quality settings; two are widescreen HD, and two are stand aspect ratio video. The various ALL ELSE modes that apply to still photos can also be applied to movies.. The pictures are very good, and you can make them even better by going into manual mode(s). At the price range of the ELPH 100, the photo quality is at least competitive with other brands and models.” – By P. Schmidt
Rating:

Found a keeper
“Pictures always turn out amazing! Our house kinda has crappy lighting and its a major problem with pictures, this camera takes the best pictures by far! (not super grainy looking like others) I also wanted to camera that shoots video. I dont use it to shoot professional quality video but Im impressed!” – By Sawyern
Rating:

The best pocket-sized Canon yet
“it does give up on any reasonable manual control, things like setting shutter speed, lens aperture, ISO. What access you do have to that level of control is buried deep inside menus. It took Canon a while to realize that for most of us, if we wanted to fool with that kind of thing on a regular basis, we would be using a different camera. This camera is designed to leverage convenience over extreme control or nth degree quality.” – By Bob Tobias
Rating:

Canon’s HS SYSTEM with a 12.1 Megapixel CMOS and DIGIC 4 Image Processor improves shooting in low-light situations without the need for a flash and lowers noise levels at higher ISO settings.

The Canon HS SYSTEM takes the frustration out of low light shooting. The system delivers clear, blur-free shots with all the ambiance intact, and frees you from the sometimes unwanted effects of using the flash. Beautiful low light shots are possible at both low and high ISO speeds, and the dynamic range is expanded to retain maximum detail in highlight and shadow areas.

The system is the result of two technologies brought together in a compact PowerShot. The first is the 12.1 Megapixel CMOS Sensor, which positions the light-receiving surface for optimal light reception. More light means clearer, blur-free images with plenty of detail and nuance, even in dark areas. Working together with the CMOS sensor to deliver the HS SYSTEM is Canon’s advanced DIGIC 4 Image Processor, which actively reduces noise and delivers high speed image processing. 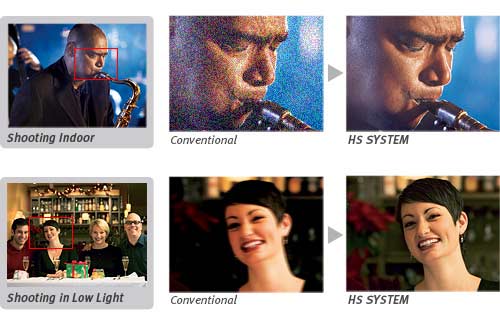 Full 1080p HD Video for exceptional quality with stereo sound, plus a dedicated movie button for easy access. Zoom optically while shooting video and keep footage stabilized with Dynamic IS.

Experiencing the brilliance of Full 1080p HD video in a Canon PowerShot ELPH digital camera has never been easier. With the convenient dedicated movie button, you’ll be able to instantly record everyday moments in amazing life-like realism at a push of a button. You can also operate the optical zoom while shooting video so you can get in close–but don’t worry about shaky footage because Dynamic IS will help keep your videos steady! 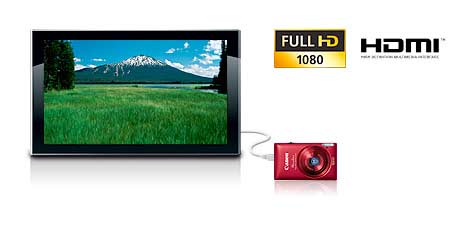 A PowerShot that Keeps Up with the Action.

Sometimes, the action just won’t stop for you. The PowerShot ELPH 100 HS digital camera is equipped with High-speed Burst Mode that can capture 8.2 frames per second, letting you catch the sequence of the action–a feature great for using at sport events!

You can also add a fun slow motion effect to you videos with Super Slow Motion Movie. Super Slow Motion Movie will record your clips at a high speed so that when you watch your videos, they’ll play back in slow motion–a feature also useful for analyzing a play-by-play of sports moves!
Advanced Smart AUTO for Stills and Videos that Shine.
Smart AUTO intelligently selects the proper settings for the camera based on 32 predefined shooting situations.

The PowerShot ELPH 100 HS digital camera takes the quality of your still images and videos to a whole new level – automatically. The camera’s advanced Smart AUTO system detects a wealth of information about the scene you’re shooting, then automatically selects the optimal settings for you. Now with an expanded range of 32 shooting scenarios, the camera handles a wide variety of situations, freeing you up to concentrate on composing your shot and capturing the moment you’re looking for. From portraits to landscapes to action scenes, the PowerShot ELPH 100 HS digital camera has you covered whether you’re shooting stills or videos.

* Smart AUTO
The camera automatically selects the best shooting settings for optimal quality based on subjects and environmental factors to provide point-and-shoot simplicity.
* P Program
Access advanced exposure compensation features while shooting mostly automatically.
* Av Aperture-priority
You define the aperture to either isolate your subject or have clarity throughout the entire picture, and the camera will choose the corresponding shutter speed.
* Tv Shutter-priority
You select the shutter speed to stop or blur action, and the camera finds the appropriate aperture. With slow exposure times, Canon’s noise reduction system activates to ensure low image noise.
* Movie Digest Mode
Records a video clip before capturing a still image and then combines one day’s worth of clips into a video.
* Portrait
The camera sets a large aperture, focusing the subject and artistically blurring the background to make your subject pop.
* Kids & Pets
Reduced focusing time freezes fast-moving subjects, so you won’t miss those special shots.
* Smart Shutter
The camera automatically takes the photo when people smile, wink, or get into frame.
* High-speed Burst
The camera shoots continuously at a high speed of approx. 8.2fps while you hold down the shutter.
* Best Image Selection
The camera takes five photos in succession, and then chooses the best one out of the bunch.
* Handheld Night Scene
Suppresses image blur even without the help of a tripod.
* Low Light
For high quality image capture in an amazing range of dimly-lit situations.
* Fisheye Effect
Add a classic photo distortion without a fisheye lens.
* Miniature Effect for Movies & Stills
Emphasizes perspective for a miniature effect by blurring upper and bottom portions of videos and stills.
* Toy Camera Effect
Simulates photos taken with “toy” or pinhole cameras, darkening the image at the edges to create a vignette effect.
* Creative Light Effect
Transform background bright spots to stars, hearts, music motes and more.
* Monochrome
Choose from three single-tone effects: Black-and-White, Sepia, or Blue.
* Super Vivid
Super Vivid intensifies existing hues, saturating the scene with bright colors.
* Poster Effect
Poster Effect combines several similar shades into one color, turning subtle gradations into eye-catching, scene-popping contrasts.
* Color Accent
Choose to retain a single color in your image while other colors turn monochrome.
* Color Swap
Select a color and replace it with a color you specify for special effects.
* Beach
Get clear shots of people at a sunny beach without darkened faces.
* Foliage
Capture brilliant shots of autumn foliage, greenery and blossoms.
* Snow
Shoot clear snow scenes without darkened subjects or an unnatural bluish tint.
* Fireworks
Grab brilliant images of skyrocketing fireworks.
* Stitch Assist
Build awe-inspiring panoramas by neatly aligning sequential images.

Record your clips in high speed (approx. 240fps), and then watch your videos in slow motion.

The PowerShot ELPH 100 HS digital camera has the tools you need to photograph every moment in crisp, clear Canon quality. From wide-angle to telephoto, the 28mm Wide-Angle 4x Optical Zoom Lens lets you capture more into every shot. The Optical Image Stabilizer will also help keep all your images steady. The big and bright 3.0-inch PureColor System LCD screen lets you see everything easily, so whether you’re trying to frame a shot or just reviewing your images, Canon helps you get the best image every time.

Easily Turn Your Memories into Videos.
Movie Digest Mode records a short video clip right before shooting a still image and then combines one day’s worth of clips into one video.

Putting together a video containing highlights from family vacations, important occasions and other special events is now easier than you might imagine. Using the Movie Digest Mode, you can have the camera automatically record a short video clip (up to approximately 4 seconds) every time you shoot a still image. The camera will then combine an entire day’s worth of clips into a single video. No editing required Ð Movie Digest Mode does all the work, so you can sit back and enjoy your video!

Add some Fun to Your Photos!
New scene modes, Toy Camera Effect and Monochrome, add an artistic look to your photos.

Add some vintage nostalgia with Toy Camera Effect. Toy Camera Effect recreates this look by darkening the edges to make them appear is if they were photographed through a pinhole lens and adding contrast. 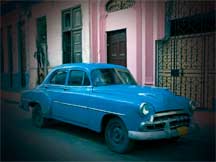 Monochrome lets you sway away from the usual black & white combination. Now you can choose from three single-toned effects: Black & White, Sepia or Blue to really give your photos the effect you’re looking for. 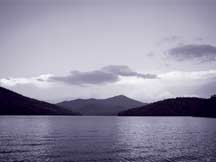 This entry was posted on Friday, November 2nd, 2012 at 6:15 am and is filed under Canon, Digital Camera, Point & Shoot Cameras. You can follow any responses to this entry through the RSS 2.0 feed. You can skip to the end and leave a response. Pinging is currently not allowed.